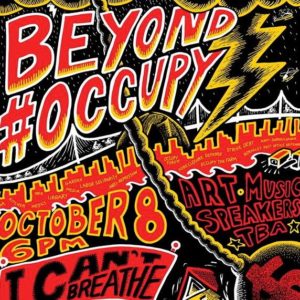 Come celebrate five years of amazing activism in the Bay Area on the fifth anniversary of Occupy, with local bands, food, and art – including photos and videos of movement actions. Activist speakers will discuss our powerful campaigns and the work that has continued since the heady days of October/November 2011.

Activists from the Black Lives Matter movement, the climate movement, the fight for $15 and the fight against gentrification and displacement will gather to reminisce about the past, debate the present, discuss what the next five years will bring – and celebrate the beauty and strength of our community.

Cherri Murphy
A social justice minister active in campaigns for black lives, living wages, and affordable housing and against the death penalty, host of community-building sessions that promote healing through spoken word and song.

Jerralyn Brown Blueford
Mother of Alan Blueford, who was murdered by OPD May 6, 2012, co-founder of the Alan Blueford Foundation and co-director Alan Blueford Center for Justice, which promotes healing for the community impacted by the violence of the police and justice system.