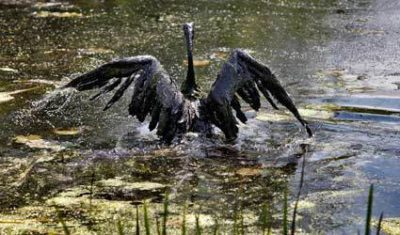 Tell the Senate to pass Robert Rivas’s AB 936, which would help prevent, contain, and mitigate spills of tar sands and other nonfloating oils, to protect our offshore waters and our own health and safety.

The bill has now passed the Assembly. The Senate Natural Resources and Water Committee will vote on it this week.

This is a critical chance to protect the Bay from dangerous oil spills, and we need your voice.

Sign this letter to tell the Senate Committee on Natural Resources and Water to pass this important bill.

As California oil production declines, more heavy crudes like Canadian tar sands oil (i.e., diluted bitumen), and crudestocks from Venezuela and Mexico, will be coming to our refineries—and our neighborhoods—via pipeline and tanker.  AB 936 addresses this growing concern by increasing currently inadequate marine safety measures.  It couldn’t be any more timely, or necessary.

Nonfloating oils, when spilled, are notoriously difficult to clean up.  We’ve seen what happened in Michigan with the 2010 Enbridge tar sands spill in the Kalamazoo River. After a cleanup effort that took five years and over a billion dollars, total cleanup of the diluted bitumen proved impossible and the mess is still there.  California needs to put adequate protections in place so that we never face such a catastrophic situation here.

Our current law does not sufficiently account for spills of oil containing diluent, which creates severe risks when it’s released.  These risks include explosion hazard, toxic air pollution, and a likelihood that the dense oil remaining after the diluent evaporates will rapidly sink into the water column.

This legislation mandates an update of the state’s contingency planning to ensure that the Office of Spill Prevention and Response (OSPR) is adequately prepared to deal with spills of those crude oils most likely to cause lasting damage to our marine environment and waterways.  It would reduce the likelihood of a spill in the first place (via notification measures), and ensure that the state has enough resources on hand to address such a spill if it occurs.

The bill’s transport notification provisions are critical to ensure that both OSPR and local communities, including our first responders, can take the steps necessary to minimize harm from oil spills.  At present neither OSPR nor the public has any reliable means of knowing in advance when tankers or trains carrying oil will be entering the state.  First responders need to know right away what type of oil has spilled, because the damage from nonfloating oil can most effectively be mitigated during the critical few hours after a spill, when the oil has not yet sunk to the bottom.

The Bay Area’s industrial and refinery towns know too well what it’s like to live with the impacts of industrial- and petroleum-related emissions, leaks, and spills.  Only two years ago, a spill by an oil tanker delivering conventional oil to Phillips 66 in Rodeo caused Vallejo residents to shelter-in-place and sent over a hundred people to the hospital.  That very same refinery has recently applied for a significant increase in permitted tanker deliveries to its wharf.  Not only does this mean increased tanker traffic and the greater probability of spills, but also quite likely a ten-fold increase in the local refining of nonfloating tar sands crude.

We need a rapid and just transition to a clean energy future enabled by a managed decline in fossil fuel production and its associated risks.  At present, however, the fossil fuel industry is visibly committed to expanding, and is seeking out imports of heavier, more dangerous crudestock in order to increase its manufacturing for export.  While this may be profitable for the industry, the resultant risks to our air, water and communities are just too great.  The least we can do is institute long overdue measures to protect the safety and health of our communities, our coastline, and our beautiful waters.