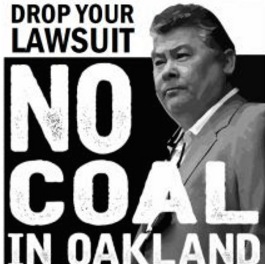 No Coal in Oakland writes that it is “horrified at the prospect that this man—who proposes to bring toxic coal into Oakland and has sued the City to overthrow its popular ban on coal—could be chosen to represent residents on a city commission.  We are urging Oaklanders to email the selection panel and explain why Tagami is not fit to serve in this position.”

Last summer, after a year-long campaign by many Oakland residents and organizations, the city council barred Tagami’s proposed coal-export terminal as a threat to health and safety. Tagami responded with a federal lawsuit that, if successful, would not only bring toxic coal cargo through already-polluted West Oakland, but would also create legal barriers to any local community seeking to protect itself from toxic threats.

No Coal in Oakland is urging Oakland residents to email the members of the selection panel to oppose Tagami’s candidacy to serve on the new police commission:

The process is moving quickly — second interviews will between August 8 and 14, so do it today!