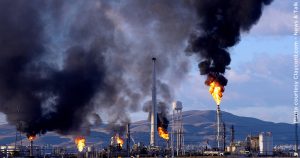 El Cerrito residents: Come out to support your city council in voting to limit particulate, toxic, and greenhouse gas pollution from Bay Area refineries. At its next meeting the city council will vote on a resolution telling the Bay Area Air Quality Management District (BAAQMD) to stop refinery pollution from increasing.

This policy is necessary not only to protect the health and safety of Bay Area residents, but to prevent the Bay Area from becoming a major outlet for oil from Canada’s tar sands. Now that our opposition has stopped the KXL pipeline, and Canadian First Nations are making progress in their campaign to stop a pipeline through their territory, the Bay Area is becoming a crucial battleground to keep tar sands oil in the ground.

A cap on refinery pollution would prevent Bay Area refineries from processing tar sands crude, since refining this extra-dirty oil would cause big increases in emissions of greenhouse gases and disease-causing pollution.

A Community-Worker coalition submitted a proposal for BAAQMD to put a cap on refinery pollution more than two years ago, but the BAAQMD staff has never seriously considered it, despite numerous board members’ requests. Now the board has ordered the staff to submit a full environmental review of the proposal, but the outcome is far from certain—the staff is still stalling, and only a few board members have committed to supporting this plan.

So community, worker and environmental groups have launched a big Bay Area-wide campaign to get city councils and county boards of supervisors to support refinery emissions caps.  The cities of San Francisco, Emeryville and Richmond have already passed resolutions supporting this policy, as has the 10,000-strong retirement community of Rossmoor.

A resolution is on the consent calendar for the next El Cerrito City Council meeting. El Cerrito residents need to show up and tell the city council they have the community’s support  in passing this critical measure.