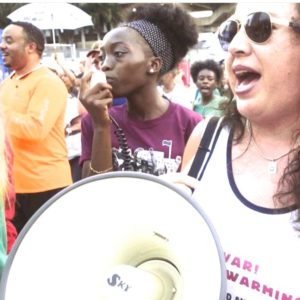 In the film Not Without Us, frontline community activists who attended the UN Climate Conference one year ago describe their local struggles and their fight for a stronger climate deal . The San Francisco Green Film Festival will show this film free at the SF Public Library to mark the first anniversary of the COP21 Paris Climate Agreement. A discussion with director Mark Decena will follow the film.

Naomi Klein, author of This Changes Everything, says this film is “A must-see portrait of frontline communities and activists who gathered in Paris in December 2015, fighting for the strongest possible climate deal while fearlessly exposing its limits. These are the voices defending the land and water in some of the most threatened places around the world, protecting the planet in the process — and it is the rare film that gives them such a compelling platform.”