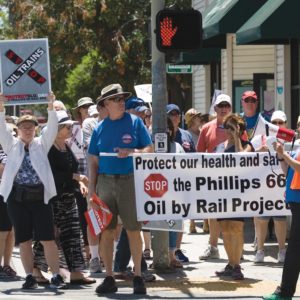 Phillips 66 announced October 2 that it would drop its lawsuit against San Luis Obispo County. The suit was filed after the county denied the company’s proposal to build a rail spur to its Santa Maria refinery. The plan was to bring extra-polluting tar sands crude oil from Canada, endangering communities — mostly low-income communities of color — as well as natural areas along the way. Dropping the suit means the defeat of this oil-by-rail project is now complete.

Many of us in the Bay Area contributed in different ways to the long, statewide campaign that finally persuaded the San Luis Obispo County Board of Supervisors to reject the Phillips 66 proposal. After the supervisors’ vote last March, Phillips 66 filed its lawsuit, claiming the county did not have the right to reject its proposal because only the federal government can regulate railroads.

This argument has been used many times against local governments trying to defend themselves against fossil fuel expansion. Valero tried the same argument in an unsuccessful attempt to persuade the Benicia City Council to approve its oil-by-rail project. And now developer Phil Tagami is using similar arguments in his lawsuit against the City of Oakland for banning his proposed coal export terminal.

Many lawyers, including Kamala Harris when she was California attorney general, have argued that these fossil fuel promoters’ interpretation of the law is wrong — that local governments do have the right to ban fossil fuel projects.

Phillips 66 dropping its lawsuit is good news, not only for the defeat of this oil-by-rail project, but for local governments everywhere seeking to protect their residents and communities from the expansion of fossil fuel infrastructure.