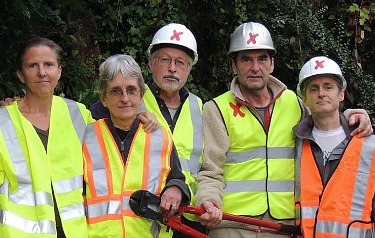 After watching a parade of administration nominees deny the reality of looming climate catastrophe, we have finally seen the new fossil fuel administration inaugurated in DC.   It seems like a watershed moment, when the climate movement needs to think long and hard about how to build the depth of commitment and strength of community that could enable our movement to shift the political and social ground under the new administration.

After a few days of resistance in DC and elsewhere, what’s next?

RSVP for a Live Web Chat with Tim DeChristopher and the Valve Turners.

Climate Disobedience Center co-founder and tar sands valve turner Ken Ward, who is set to go to trial Monday January 30th, is going to take that conversation into court with him.  The night before trial, Ken, Annette, Leonard, Emily and Michael will have a conversation with Tim DeChristoper about their action, the legal process, and our prospects under this fossil fuel regime.

Ken, in a recent profile in the Willamette Weekly, was pretty clear about what’s needed in these times:  “If our major response to the Trump administration is to put some people out with placards, I think Trump will laugh at that,” Ward said.  “We need to be doing things that fundamentally strike at the heart of what’s killing us.”

Please RSVP here to get the link and information about how to join in.