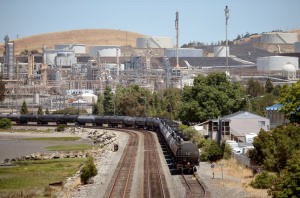 The community-worker coalition that’s been fighting for years to limit pollution from Bay Area refineries won a significant victory June 15. The Air District board told the staff to evaluate our proposal for immediate, numerical caps on refinery emissions, along with three other proposals. This move came despite strong opposition from Air District staff, who argued that numerical caps on greenhouse gases are pointless and that numerical limits on all forms of pollution are legally questionable.

The next challenge for the coalition will be getting the Air District to move fast enough to prevent the refineries from bringing in a major influx of extra-polluting crude oil from Canadian tar sands.

The staff recommended that the board authorize further analysis of three of these proposals. It recommended dropping the community-worker proposal, using the same arguments offered before: that emissions caps may not be legally defensible and could conflict with the state’s cap-and-trade process for greenhouse gas emissions.

After strong arguments from the community-worker coalition and allies on the board, however, the board directed the staff to prepare an official Environmental Impact Review of each of the proposals. In more than two years since the coalition has been advocating these caps, the staff has failed to produce a detailed analysis of this proposal, despite numerous board requests. So this clear board direction represents a major advance for the environmental, community, and labor groups.

Board members John Avalos of San Francisco, Rebecca Kaplan of Oakland, and John Gioia, the Contra Costa County supervisor whose district includes four oil refineries, joined the community-worker coalition in insisting on a full review of all four proposals.

It should be possible to produce the Environmental Impact Reviews, provide a period for the public to comment, and produce revised reviews before the BAAQMD’s next board meeting in September. But given the slow pace of work on refinery emissions rules in the past, the community-worker coalition intends to keep pushing for a September report, so it will be possible to adopt final rules before the end of the year.

There’s also the question of what topics the Environmental Impact Review will include. In the June 15 meeting, Board member Kaplan insisted that the EIR must include an estimate of the health impacts of the emissions increases that would occur if caps are not adopted.

The Bay Area Air Quality Management District (BAAQMD) has been discussing methods for limiting refinery pollution for more than three years. More than two years ago the community-worker coalition submitted its proposal: Tell refineries they’re not allowed to increase the levels of pollution they emit, starting now.

In addition to limiting harm to health and the climate, this proposal is critical for stopping Bay Area refineries from bringing in large amounts of crude oil from Canadian tar sands. Because tar sands oil takes so much energy to process, and because it spews out such large amounts of pollution that’s harmful to health, a cap on refinery emissions would effectively prevent an increase in tar sands refining. Scientists have stated that to prevent runaway climate disaster, the tar sands oil has to stay in the ground.

Bay Area refineries are turning to tar sands crude because their traditional sources of crude oil – in California and Alaska – are drying up. Tar sands oil producers, for their part, are increasingly looking to the Bay Area as an outlet for their product, since the Keystone XL pipeline was defeated, and Canadian First Nations are strongly resisting the shipment of tar sands oil through their territories. And Bay Area refineries, already equipped to handle “heavy” crude oil, are closer to being ready to refine tar sands than most others.

The Western States Petroleum Association, representing the oil companies, has been fighting regulation every step of the way. Recently they’ve sent mailers opposing regulation to residents in the districts of selected BAAQMD board members. It is reported that they are hoping to get a California legislator to introduce a bill banning local caps on greenhouse gas emissions.