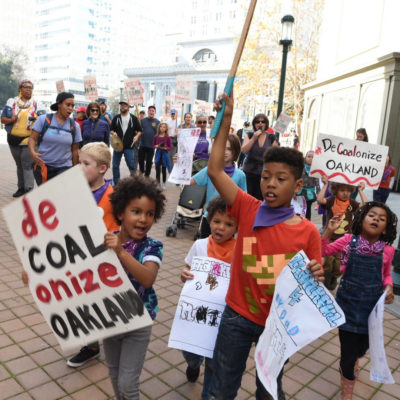 Before a packed courtroom of No Coal in Oakland supporters last week, Judge Vince Chhabria ordered a trial on whether the City of Oakland breached its agreements with developer Phil Tagami when it enacted a ban on coal storage and handling in July 2016.   The trial begins on Tuesday, January 16 and continues the next day on Wednesday, January 17, before jumping to Friday, January 19, and then to Tuesday, January 23.

The judge effectively denied summary judgment to both sides on the developer’s breach of contract claim and left summary judgment motions on federal constitutional and preemption claims hanging for later resolution after trial.  Although the judge acknowledged that this approach was “unusual,”  he noted that “everything about this case has been unusual.”

The judge encouraged the parties to focus at trial on whether the City had “substantial evidence of substantial danger” to health and safety of West Oakland neighbors of the proposed coal terminal when it adopted the ban on coal.  The judge repeatedly underscored his need to get a clearer understanding of the weight of the evidence in the record before the City Council on air quality impacts of the proposed coal export terminal.

There will be no jury in the case so Judge Chhabria will decide questions of fact as well as of law.  He is particularly concerned about whether the City’s analysis of air quality impact of the project was well-founded.  The developer’s counsel asserted that there were fundamental errors in the Environmental Science Associates (ESA) report commissioned by the City.  The City disagreed.  The judge commented that, in his tentative view, “the report from the Public Health Advisory Panel seems quite a bit more reliable and convincing than the ESA report.”

In their joint pretrial conference statement, the parties had estimated that the trial would take 12 court days.  The judge slashed this to 4 days, with 6 hours of “air time” allotted to each side. “Air time” includes any time when attorneys are examining or cross-examining witnesses.

No Coal in Oakland encourages supporters to attend the trial and meet together after breaks in the action.