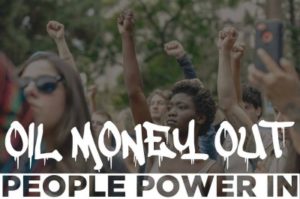 The only way to disrupt the oil industry’s political influence is with people power.  Join us in Sacramento for a march and rally and send a clear message to our elected officials to swear off dirty oil money!

Last year, in lobbying alone, the oil industry spent $36 million to push our elected officials to do their bidding.  Over the past ten years, that number amounts to $266 million. Unsurprisingly, during this time there has been little to no headway in reining in the most toxic or damaging practices of the oil industry here in California.  This, despite the fact that our state scientists have found that many of these practices are demonstrably toxic and have laid out clear protections for public health.  This obscene spending has allowed the industry to prevent the passing of meaningful legislation that would limit their ability to drill and pollute.

After the state of California performed independent studies, found results on the toxicity of oil operations, and made strong recommendations to protect public health, our legislators instead protected the oil industries and left the public vulnerable to toxic exposure.

We need champions looking out for our communities, not for the profits of the oil industry.  Until the flow of money into our democracy and the control of lobbyists stops or is seriously curtailed, nothing is going to change.

Oil Money Out is sponsored by Rootskeeper, Food & Water Watch, Center for Biological Diversity, California for Progress, Courage Campaign, CREDO, The Other 98%, Californians Against Fracking, Progressive Democrats of America, and the Sunflower Alliance.

Organizations:  You can join Oil Money Out as a partner in erasing big oil’s influence from politics here in CA.  Sign on your organization here.