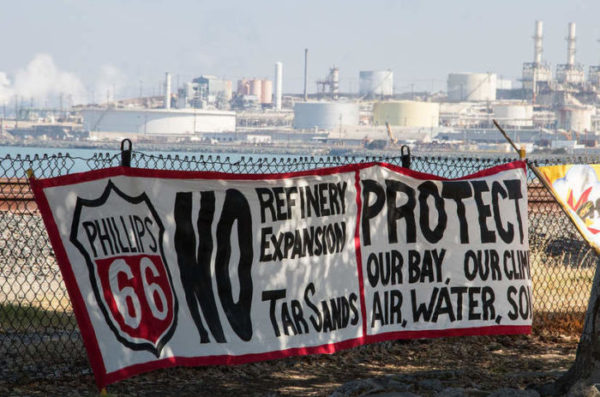 Protect the Bay—#Tar Sands Free SF Bay is a coalition working to protect our air, our waters, and our communities from tar sands crude oil.  Sunflower Alliance is proud to take part in this epic fight.

Tar sands is one of the dirtiest crude oils in the world, and beyond air quality concerns, even a single spill would be disastrous for communities that call the Bay home—or for any community along the shipment route that begins in Northern Canada.

We who live along the shores of San Francisco Bay, San Pablo Bay, and the mighty Pacific from British Columbia to Los Angeles—all of us are under threat if an oil company’s reckless pursuit of profit is allowed to trump our collective right to an unspoiled environment.

If Phillips 66 succeeds, it would threaten worker safety, degrade our climate, and radically worsen the quality of life for everyone in the Bay Area, especially that of our neighbors living in the shadow of the Rodeo refinery.

Phillips 66 plans to refine highly toxic “price-advantaged” tar sands crude, or bitumen. This is an asphalt-like substance mined out of now devastated First Nations land in Alberta, Canada.  Formerly magnificent boreal forest has been leveled with Mordor-like devastation by the mad pursuit of bitumen, which has poisoned soil, air and water and threatens to forever destroy thousands of years of indigenous life on the land.  If Phillips 66 gets its way, this destruction will continue all along the length of the supply chain to the Bay Area.

Solid bitumen is diluted with highly inflammable propane, which allows it to be transported through pipelines, then containerized, and loaded onto oil tankers.  This diluted form is called dilbit.  From Vancouver and other ports, it’s shipped down the Pacific coast to Bay Area refineries, where small amounts of it are already being refined.  If Phillips 66’s plans are approved, vastly increased quantities of tar sands crude will be delivered to the P66 wharf for refining at its Rodeo facility.  Its Propane Recovery Project was already approved once by the Contra Costa County Board of Supervisors, then litigated in the courts, and is now pending a second round of county evaluation.  A new Environmental impact Report will be circulated soon.

Tar sands refining has dangerous air pollution impacts.  Rodeo, the home of Phillips 66’s Bay Area refinery, already suffers from the impacts of pollution and can ill afford any increase of toxic assaults.  It ranks in the state’s 97th percentile for hazardous waste, according to the state Office for Environmental Health Hazard Assessment (OEHHA), and in the 80th percentile for pollution.  Pollution-caused disease rates also run high: Rodeo ranks in the 75th percentile for cardiovascular disease, in the 92nd percentile for low birth weight, and in the 97th percentile for asthma.  Tar sands refining means dangerous increases of heavy metals and other carcinogenic substances, as well as deadly particulate matter—of which there is no safe limit, according to a very recent EPA study.  Refinery neighbors would pay even more dearly in health costs to promote the refinery’s bottom line.

At present the Wharf Permit Revision is in a kind of bureaucratic limbo, with both the Bay Area Air Quality Management District and Contra Costa County displaying extreme reluctance to take the lead in approving or disapproving the project.  But the Air District recently approved an increase in the amount of oil that can be processed in a unit essential for refining very heavy crude oil, such as tar sands.  And the potentially explosive Propane Recovery Project could be approved a second time by the county’s supervisors, who with one exception were previously unconcerned about the magnitude of the associated blast zone.

Please tell our elected officials that Contra Costa County needs to protect its communities from a proposed refinery wharf expansion that so clearly threatens air and water quality, and the worsening climate.  The county must do its due diligence, step up to its responsibility, and become the lead decider—i.e., the lead California Environmental Quality Act (CEQA) agency—for the Marine Terminal Permit Revision Project.

Check out the coalition website with petition, press releases, factsheets, and more.  #TARSANDSFREESFBAY