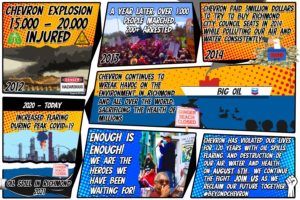 Ten years later: what has changed?

Join a coalition of Richmond community and environmental justice organizations to call out Chevron’s 120 years of harm and mark the tenth anniversary of the August 6, 2012 explosion and fire at the Chevron Richmond refinery. On that date ten years ago, Chevron’s willful negligence caused a fireball that spread a cloud of toxic smoke over Richmond, sending 15,000 residents to local hospitals with complaints of breathing problems.

In 2015, the federal Chemical Safety Board issued a stinging indictment that blamed Chevron for the event. The report said Chevron had failed to do necessary repairs to keep its equipment safe: When a badly corroded pipe sprang a leak, instead of shutting operations down, it tried to patch the pipe, which made the danger worse. Soon the pipe broke, releasing a huge cloud of toxic fumes that ignited into a fireball. The CSB dramatized the story in this animated video.

The state Division of Occupational Safety and Health issued 25 citations against Chevron, including 11 “willful serious” and 12 lesser “serious” violations related to the blaze. Chevron pleaded no contest in a criminal case and accepted a plea bargain of $1.28 million in fines and more than $720,000 in restitution payments to three different agencies,

The following August, more than 1,000 people marched on the refinery to mark the explosion’s first anniversary, part of the 350.org Summer Heat campaign of civil disobedience to call attention to the crimes of the fossil fuel industry. More than 200 people participated in nonviolent direct action and were arrested at Chevron’s gate .

This year the anniversary will be marked with a press conference on Friday and on Saturday, marches through Richmond, a kayaktivist demonstration, and a rally at Chevron Gate 14.