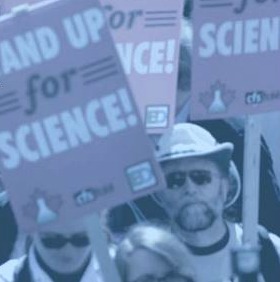 #StandUpForScience:  Join scientists, allies, and impacted communities at a rally and press conference outside this year’s conference of the American Geophysical Union, the largest organization of earth scientists in the world.  This will be the first major convening of climate scientists since climate deniers gained unprecedented power.  The annual conference, which brings 26,000 scientists together, offers a global stage for scientists, allies, and impacted communities to stand together and send a message in this pivotal moment: we must Stand Up for Science.

Science is under attack.  For decades, fossil fuel interests have spread climate science disinformation and funded climate-denying politicians.  Now we face an administration that proposes to gut science funding, pull out of the Paris Climate Agreement, appoint a climate denier to head the EPA transition team, derail the Clean Power Plan, and roll back federal fuel economy standards.   This new regime also intends to increase the leasing of federal lands for exploitation of coal, oil and gas, expediting the approval of pipeline projects including the Keystone XL and Dakota Access Pipeline.  Real people and communities bear the brunt of these actions.

Join dozens of Earth and climate scientists, Indigenous leaders, and representatives from communities that are fighting back.  Together, we’re calling on science institutions like the AGU to protect science on behalf of our communities and drop fossil fuel sponsors who spread disinformation and bully scientists.  And we’re urging the Trump administration and Congress to:

– Acknowledge that climate change is a real, human-caused, and urgent threat.
– Uphold the United States’ commitment to the Paris Climate Agreement.
– Protect scientific integrity in policy-making.
– Protect government scientists from censorship or suppression.
– Reduce carbon pollution and U.S. dependence on fossil fuels.
– Make the U.S. a clean energy leader, and champion the just transition to a new energy era that works for all of us.

This isn’t just about climate science — it’s about survival.  It’s about the disproportionate impacts on communities of color and low-income communities.  And it’s about solidarity.

Speakers are scientist Michael Mann, Naomi Oreskes, Peter Frumhoff at Union of Concerned Scientists, Leila Salazar at Amazon Watch, Andres Soto at Communities for a Better Environment, and others (list in formation).