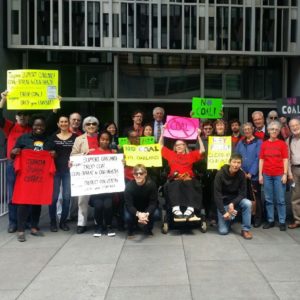 Join No Coal in Oakland and the Sunflower Alliance in protesting the Bank of Montreal’s central role in financing Oakland’s unwanted coal terminal.  The bank has refused to discontinue its attempts to finance the terminal, despite its professed commitments to sustainability.

We will be leafletting outside the annual conference of a group called Principles for Responsible Investment, timed to coincide with the Global Climate Action Summit.  This is to alert the conference participants—bankers (including representatives of BMO), investment advisors, pension funds and environmental organizations—and put pressure on the Bank of Montreal to abandon this toxic project.

The Bank of Montreal has been instrumental in attempting to raise the $$ to finance the proposed coal terminal on the Oakland waterfront.  They lobbied to get $50 million from the State of Utah and proposed to raise $200 million from pension funds for this project.

We want to stop the Bank of Montreal (which claims to practice socially responsible financing) and warn pension funds and other institutions that they may be targeted for this toxic and risky investment.

Please feel free to email and post this BankofMontrealProtest flyer.  You can also print out this one—printable B&W —especially on yellow paper, and distribute widely.

And here’s a tweet that went out from Bill McKibben—please retweet if you can!