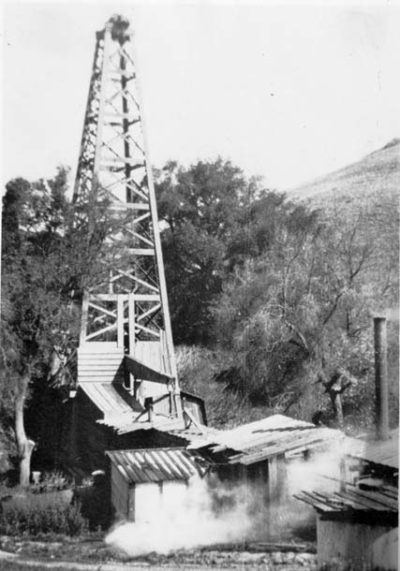 When we think of the fossil fuel industry in Contra Costa County, what probably comes to mind is coal export (Richmond) or oil refining (Richmond and the rest of the county).  Contra Costa County hosts four of the five Bay Area refineries that make up the second largest refining center on the West Coast.  But it is also the eighth largest center of oil and gas extraction in the state, right after Santa Barbara and just before San Luis Obispo.

In light of this history, perhaps it’s not surprising that in May 2020 the County reviewed a new application for exploratory drilling in unincorporated Brentwood and found it good.  A county planner performed a perfunctory environmental review of a proposal calling for three exploratory oil and gas wells, a permanent well if “commercial quantities” are found, and the installation of a gas pipeline extending under the city of Antioch.  The County announced its intention to issue, pending public comment,  what’s called a “negative declaration” in the parlance of the California Environmental Quality Act (CEQA).  In other words, there’s nothing to look at here, folks, move along:  more oil and gas drilling will have absolutely no negative impacts on public health or climate.

A deluge of comments calling for a rejection of the Negative Declaration poured into the County by the end of the comment period on June 9th, 2020.  They demanded denial of the permit, or at least a full Environmental Impact Report on the project.   On August 1st, the Department of Conservation and Development announced that “additional environmental review is required” and that it would  be issuing a Draft Environmental Impact Report for public comment in October of 2020.  The release date was pushed to April—and as of May 2022, that report is still pending.  Everyone who previously commented will be notified if and when that report is released, and once the public comment period has concluded a public hearing will be held.

So there we were at the start of a pandemic learning that some fast operator wants to increase oil drilling in East County, with inevitable costs to air and water quality and negative impacts on community health.  Indiana-based PowerDrive Oil and Gas Company, LLC specializes in “rejuvenating neglected California oil fields” and has active wells going in Kern and Orange counties.  (PowerDrive is also connected to global wastewater management, but that’s another story.)  Now it’s got its eyes on the Old Brentwood Oil and Gas Field, first discovered in 1965, and at its production heyday a half century ago.  It seems that PowerDrive, in silent partnership with Brentwood-based Sunset Exploration, wants to get the party started all over again, and on agricuturally-zoned land, no less.

This does not sit well with close neighbors to the proposed drilling site who are a mere 700 or 1,100 feet away, depending on who’s counting.  Or with the elementary school and major medical facility (Kaiser Antioch) only a half mile away.  Or the adjacent shopping centers and neighborhoods.  We have learned a lot since the mid-sixties about the terrible health impacts caused by living near oil and gas development.  A FracTracker literature review found these impacts include higher cancer risk, depression, pneumonia, increased asthma attacks, skin-related hospitalizations, depression, and other general health symptoms.  For pregnant women, living closer to drilling sites is associated with high-risk pregnancies and premature births, a higher risk of having babies with birth defects, and low birth-weight babies.

Current research shows that a 2,500-foot setback from drilling sites is on the lower end of the range of distances which could reduce the harmful health and quality of life impacts from toxic emissions and exposures.  A statewide effort is underway to enact both county- and state-level setbacks—based on health, scientific, and other data—in order to protect “sensitive receptors” such as schools, childcare facilities, playgrounds, residences, hospitals, and health clinics.  In the meantime, these known health impacts go wholly unmentioned in the County’s environmental review.  (See this compilation of research on the Public health risks of oil and gas drilling .)

Three exploratory wells will be drilled, and if oil and/or gas is found in commercial quantities, casing will be installed and a smaller completion rig will be moved in and a permanent production well will be installed.  Exploratory drilling time is estimated to take approximately 20 days per well with continuous 24 hour per day, 7 days a week operation until completion.  If commercial quantities are found, installation of a completion rig will take an additional 30 days, and the rig will operate about 12 hours per day.  The proposal also includes the installation of a gas pipeline, which will run approximately 4-feet under the existing access road and will be 3-inches in diameter. The total length of this pipeline will be approximately 3,350 linear feet, though most of it will be within the city limits of Antioch. 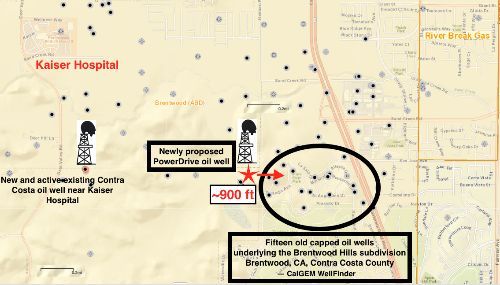 This new site would join an already existing site on Deer Valley Road, just outside of Antioch city limits, and located a half mile away from Kaiser Antioch.  The drilling operation—a joint production of Sunset Exploration and UK-based Reabold—was approved by the county in July 2019.  Brentwood Hills residents filed complaints in July 2020 about strong, sickening hydrocarbon odors that appear to be related to the raw methane flaring from this site a full mile away.  These residents live in the very subdivision that will also be most highly impacted by the new drilling.  Fifteen houses in this neighborhood were built twenty years ago over capped oils wells, and some of these homes contain methane vents.  There are also methane vents disguised as lamp posts scattered through the neighborhood.   These vents—and the emissions they are designed to release—are the troublesome legacy of the first phase of drilling in the Old Brentwood Oil and Gas field.  Our job is to make sure there is no second phase, and that Brentwood Hills residents suffer no further impacts from oil drilling which no one really needs.

Despite what the County stated in its Negative Declaration:

The Press, Oil and gas-drilling project heating up community, 6/5/20