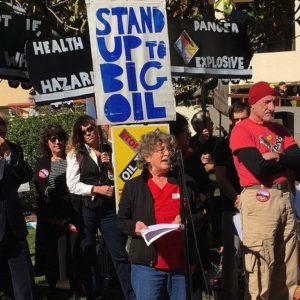 Tell San Luis Obispo County Planning Commission to reject the Phillips 66 delaying tactic and deny their oil-by-rail project once and for all! The proposed rail spur to the Phillips 66 Nipomo refinery would mean trains filled with the dirtiest kind of crude oil – from the Canadian tar sands – would travel through Northern California and along the coast. The project would endanger communities, sensitive waterways, and wildlife along the way, as well as adding to the growing catastrophe of climate change.

Imitating the tactic Valero has used to stall a decision on its oil-by-rail proposal in Benicia, Phillips 66 is now claiming San Luis Obispo County doesn’t have the authority to reject its project because only the federal government can regulate railroads. It’s asking San Luis Obispo County to delay its decision on the project until it gets an opinion from the federal Surface Transportation Board.

Many lawyers, including California Attorney General Kamala Harris, say the oil companies’ legal arguments don’t hold water. Federal “preemption” of railroad regulations, they say, does not prevent local governments from protecting the health and safety of their residents. Rather, the job of the Surface Transportation Board is to settle disputes between railroad companies. The San Luis Obispo County planning staff agrees that the county has the authority to reject the crude-by-rail project. It’s sticking to its original recommendation that the Board of Supervisors turn the project down.

San Luis Obispo County residents, environmental groups and others opposed to shipping oil by rail will speak at the county Planning Commission hearing this week, telling them to reject the delay tactic and stop the Phillips 66 rail project.

If you can’t go in person, email the Planning Commission here