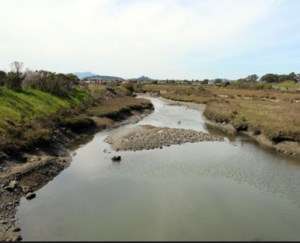 Tell the state Toxic Substances Control Board (TSCB) to make Zeneca clean up the toxic stew it left in its “chemical evaporation ponds” on Richmond’s South Shore. Zeneca (formerly Stauffer Chemical Company) has presented a “remediation” plan that would leave toxic levels of arsenic, PCBs, heavy metals, DDD, DDT, benzene, proprietary pesticides and other compounds in the ground, where they will continue to leach into the surrounding soil, groundwater, Stege Marsh and the San Francisco Bay, threatening the health of plants, animals, and humans.

The TSCB has extended the comment period on the Zeneca plan to October 10, so there’s still time to submit a comment asking the board to require Zeneca to do a complete cleanup of the ponds – remove all contaminated soil and sediment and restore them to their natural wetland state.

The chemical evaporation ponds are just a part of the 86-acre, highly contaminated Campus Bay site, which also includes a toxic waste dump covered with a temporary cap. Studies have shown that fish in the area have high levels of toxic chemicals in their bodies and suffer from serious diseases and reproductive harm. People living nearby – mostly low-income people and people of color — are overburdened by pollution and have higher cancer rates than in other areas.

Tarnel Abbott, a volunteer member of the Richmond South Shoreline Citizens Advisory Group to the DTSC, points out that the freshwater lagoons used as chemical evaporation ponds were created by the Stauffer Chemical Company in the first place. Originally this area was part of the complex system of wetlands surrounding the Bay. Restoring the area to its original wetland state, free of toxic chemicals, should be part of the general effort to restore our wetlands, as our best defense against sea level rise and flooding. Bay Area residents expressed their support for this effort by approving Measure A, to fund wetlands restoration, in last June’s election.

WHAT YOU CAN DO

Submit a comment to the Toxic Substances Control Board, asking them to reject Zeneca’s partial remediation plan and require a full cleanup of the area they contaminated.