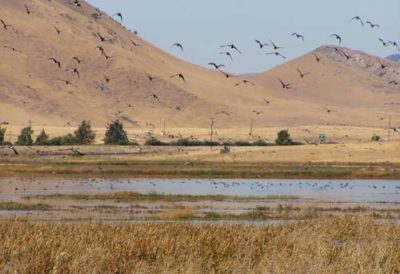 Sunset Exploration, the same company that proposes to restart oil drilling outside of Brentwood, has also applied for a permit to drill for gas within a protected area in the Suisun Bay wetlands, the largest marsh on the West Coast.  But on April 2nd, the California Department of Justice put Sunset Exploration and the Army Corps of Engineers, the project’s lead deciding agency, on serious notice.   “Based on the information currently available, ” the press release reads, “DOJ does not believe that Sunset Exploration’s proposal is in the public interest.”  DOJ urged the Army Corps to fully consider the proposal’s significant environmental impacts, including harm to adjacent environmental justice communities and protected species, as well as increased greenhouse gas emissions, before deciding whether to grant the requested permit.

Eleven environmental organizations (including Sunflower Alliance) signed on to comments to the Army Corps on February 26th pointing out that “approving new gas development would cause significant harm to air and water quality, the surrounding ecosystem, and the climate,” and that “issuing permits for new fossil fuel development is fundamentally incompatible with a safe and healthy future.”  The letter also notes that the Suisun wetlands “provides habitat for multiple endangered, threatened, and fully protected species.”  It is “part of a critical ecosystem supporting a multitude of imperiled species,” and is a “vital body of water that provides the region with jobs, recreation, and natural beauty that draws tourism from around the world.”  The letter calls for a thorough environmental review of the project.