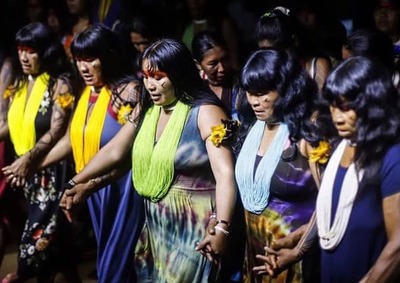 Stand with local Indigenous activists in solidarity with their Indigenous relatives, the Amazon, and communities at risk under Brazilian’s President Bolsonaro.

Idle No More SF Bay writes:  “Indigenous people and allies across the Americas are strongly opposed to Brazilian President Jair Bolsonaro’s actions to eliminate the rights and commit genocide of Indigenous people while opening up the Amazon to corporate interests.  Brasil Solidarity Network (BSN) has been organizing rallies at the Brazilian Consulate in San Francisco to stand up to Bolsonaro’s policies and to lift up the harms to Indigenous people, marginalized communities and the Amazon.  Idle No More SF Bay and local signatories on the Indigenous Women of the Americas Defending Mother Earth Treaty are collaborating on this action which is the Solstice obligation of the Treaty.  We invite you to join us.

This action will include speakers, music and the creation of a mural in front of the Brazilian Consulate.  You are invited to bring musical instruments, handmade banners and your open heart. Organizers do not expect arrests, but we encourage everyone to attend a training on nonviolent civil disobedience.  These trainings also share the many supporting roles that one can take other than risking arrest.”

Find updates on the action and more information about Bolsonaro’s racist policies on Facebook.