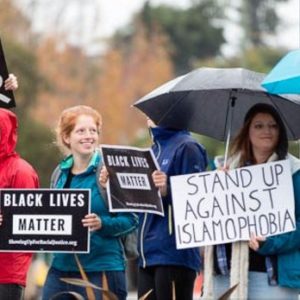 Join progressive groups to stand up against fascism, as white nationalists hold a weekend of events in the Bay Area on August 26 and 27.

On Saturday, August 26, a Patriot Prayer “Free Speech Rally” at 2 pm at Crissy Field Beach in San Francisco is billed as an event for peace and freedom, but previous Patriot Prayer gatherings have attracted white supremacists, neo-Nazis and far right militiamen.  Speakers at the event will include Kyle Chapman, aka Based Stickman, celebrated for attacking protesters at a rally on the Berkeley campus last March.

On Sunday, August 27, a “No to Marxism” rally will take place at Civic Center Park from 1 to 5 PM.  Organizers say Berkeley is “ground zero for Marxism” and that they’re gathering to expose the plan to convert the US to a communist nation.  Stickman and other far right figures will also be part of this event, which Chapman has called the “Battle of Berkeley.”

PEACE, MUSIC, AND LAUGHTER, a kid-friendly gathering in Civic Center Park featuring speeches by leaders of the LGBT community, Mayor Ed Lee, and more, plus performances by many artists.

SF LOVED-UP MOBILE DANCE COUNTER-RALLY on Marina Green. Organizers write: “US: We bring a mobile, portable FM transmitter and broadcast as many bangin, cheesy, party pop dance athems as you can shake your amazing booty to.  YOU: Dress in your amazing colorful fabulous best AND bring a battery powered boom box. The more boomboxes the more music, the more counter-rally goodness.”

Details to be posted soon here

BAY AREA RALLY AGAINST HATE — Organizers write: “We’re residents of the Bay Area — people of color, queer, gay, and trans people, liberals and leftists. We think it’s time to get together, celebrate our differences in solidarity, and speak out against the hateful currents in American society. Fascists and white supremacists are meeting in Berkeley to try to intimidate us and incite violence. We’re meeting near UC Berkeley campus, blocks away and on the other side of the downtown, to speak to each other about the world we want. Join us, bring snacks, bring signs!”

JOIN SURJ BAY AREA TO RESIST RACIST VIOLENCE AND HATE — Standing Up for Racial Justice (SURJ), which works closely with Black Lives Matter activists, will gather “to refuse violence and intimidation by white supremacists and nazis who are rallying in Berkeley.”  They write:  “Meet at Ohlone Park and march with us to Berkeley City Hall where we will maintain a presence and send a clear message: No racism, no hate speech in Berkeley. We stand strong for Black lives and racial justice, and shoulder to shoulder against Islamophobia and the scapegoating of immigrants.” More info will be posted soon here   and here

11 AM, Ohlone Park, Hearst and Martin Luther King, Berkeley.  Then march to Old City Hall, across the street from the fascist rally.
Translate page