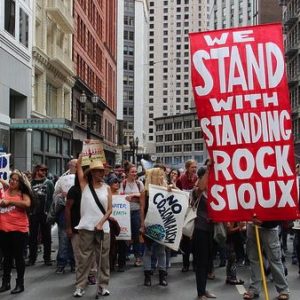 Join fellow union members as we stand with the Land and Water Protectors at Standing Rock and call on the banks financing the Dakota Access Pipeline to pull their money from the project.

The $3.8 billion Dakota Access Pipeline, if completed, would move 500,000 barrels of crude oil per day across four states, deepening already catastrophic climate change and threatening the water supply and sacred sites of the Standing Rock Sioux Reservation. Thousands of people, including members of over 200 tribes, have camped at the site for months to prevent construction of the pipeline, facing intense surveillance, arrests, pepper spray, and attack dogs. They have called on supporters to challenge the banks financing the pipeline.

A total of 17 financial institutions have loaned Energy Transfer Partners, which is building the Dakota Access Pipeline, a total of $2.5billion, including $467million from Wells Fargo. In addition to bankrolling the pipeline, Wells Fargo is behind the massive eviction and foreclosure crises, profits from private prisons and immigrant detention centers, funds payday lenders, engages in discriminatory lending, extracts wealth from black and brown communities, supports police foundations, and backs anti-worker, union-busting initiatives.

As union members, we believe in the fundamental right of all workers to a safe and dignified livelihood. But we need not just jobs and paychecks, but clean air, water, and soil for ourselves and for our children’s children. We believe that the costs of a just transition should be funded by billionaire banks, not by workers’ wallets. We believe in a labor movement that can lead with a vision of our skills being put to use repairing ecological damage, not causing it. We believe in a labor movement grounded in workers justice, climate justice and racial justice. We believe in the sovereignty, leadership, and traditional ecological knowledge of indigenous peoples. We stand with Standing Rock.

Sponsored by Climate Workers. If your organization would like to co-sponsor, please complete the form here:

Join us for planning meetings on Tues, Nov. 1st at 6PM and Saturday, Nov. 5th at 4PM, locations TBA. For more information, contact Brooke Anderson at brooke[at]movementgeneration.org or 510-846-0766.