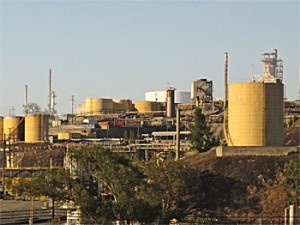 The Benicia City Council caved in to Valero pressure on April 19th, citing “lack of sufficient data” to make a final decision on the refinery’s crude by rail proposal.  Only Mayor Patterson and one other council member were determined to proceed with a vote on the EIR and the land use permit.  They were outvoted by three colleagues who agreed to continue their deliberations until September 21st so that Valero would have time to petition the Surface Transportation Board (STB).  This petition, if approved, would result in a declaratory order clarifying the federally pre-empted limits placed on any city considering a land use permit for a refinery crude by rail proposal.

Valero is trying to head off a local loss by gambling for a much larger national win on crude by rail policy.  They’re using the Benicia project as a test case that could drastically expand the range of federal preemption of rail regulation.  And thus far their bluff is succeeding.  Somehow Attorney General Kamala Harris’s strongly worded April 15th letter was not sufficient to convince the three enabling Council members that they had the legal grounds to deny Valero’s project.  “For Benicia to turn a blind eye to the most serious of the Project’s environmental impacts,” Harris wrote, “merely because they flow from federally-regulated rail operations, would be contrary to both state and federal law.”  But under the thrall of testimony from a UP railroad exec, Valero management, and Brad Hogin, long-term industry hack and the City’s contract attorney, the three contrarians chose to ignore the Attorney General’s warning that “it would be a prejudicial abuse of discretion for [a public] agency not to consider all of the project’s foreseeable impacts in exercising its authority.”  Read the full letter here.

They were also unconvinced by an April 15th editorial in the SF Chronicle condemning the Valero project and urging the City Council “to do the right thing for Benicia—and the planet” and deny the permit.

These unfortunate events follow the tremendous victory that was the Benicia Planning Commission’s unanimous rejection of the land use permit that would allow construction of a rail terminal on Valero property, along with  daily off-loading of two 50-car trains carrying Bakken shale oil and/or Canadian tar sands.  Valero took no time in appealing this decision on March 15th.

We remain firm in our resolve to support in every way possible Benicia’s authority to protect its health and safety and reject Valero’s dangerous proposal.