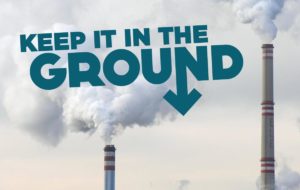 Help pack San Francisco City Hall to show support for this trailblazing bill introduced by Supervisor John Avalos, which will be heard before the Board of Supervisors’ Budget and Finance Committee.

The legislation would prohibit the city from leasing land for fossil fuel extraction beginning in 2020, when Chevron’s 26-year lease with the city expires and might otherwise be renewed.

In spite of the city’s ambitious goal to reduce carbon emissions, it makes hundreds of thousands of dollars every year leasing 800 acres of city-owned land in Kern County to Chevron for fossil fuel extraction.  That money has been funding San Francisco libraries and Parks and Recreation—and there’s a 50-% probability that it comes from fracking.  It doesn’t make sense that the City would continue getting revenue from fossil fuel extraction when it’s trying to reduce its dependency on fossil fuel.

That’s why this ordinance is so exciting.  It could set a precedent for other major California cities to follow suit, and it would send a major signal to Big Oil as the city prioritizes a transition to a clean energy future.

The bill also requires inspection and cleanup after extraction is completed and calls for the city to pursue alternative uses like renewables on the Kern County land.

Eight of the 11 BOS members are sponsoring the bill, indicating that it has a good chance of passing.  The bill will be forwarded to the full Board of Supervisors after this Budget and Finance Committee hearing, where the public will have its only opportunity to comment.  Please join us to show support and help cinch this victory for San Francisco and for the climate.