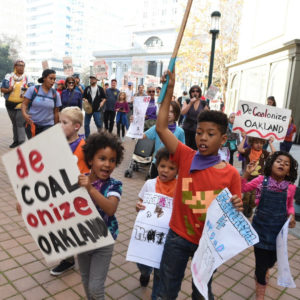 Join a youth-led and youth -organized rally to show Phil Tagami and the City of Oakland that the youth will not stand for coal in their city. Youth will be there to make some noise and oppose coal in the Oakland Bulk and Over-sized Terminal.

Tagami, developer of the Oakland Bulk and Oversize Terminal, is suing the city of Oakland for blocking his plan to export coal. The City Council unanimously voted to block the coal terminal to protect the health and safety of Oakland residents, especially the residents of West Oakland, where coal trains would have spewed toxic coal dust on their way to the port.

A three-day trial over the lawsuit ended January 19 without a clear signal from Judge Vince Chhabria as to how he will rule. Chhabria’s ruling is not expected until after he has had a chance to review post-trial briefs and other papers to be filed by the parties in the coming weeks and holds a final hearing tentatively set for March 28.

In the meantime, the fight against coal in Oakland continues

Hosted by New Voices are Rising