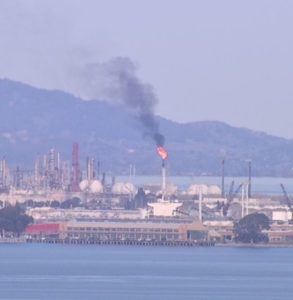 Join Communities for a Better Environment at the Richmond City Council meeting on Tuesday, February 25 to hear their presentation on the causes behind the increases in flaring at the Chevron Richmond refinery over the past year.

Flaring at the refinery February 10 and 11 released toxic sulfur dioxide along with the usual cocktail of pollutants,. Chevron evacuated about 100 workers but the community got no warnings or shelter-in-place orders.

CBE’s presentation  to the city council will be based on data obtained from BAAQMD per Public Records Act requests. These requests were finally complied with more than ten months past the statutory deadline.