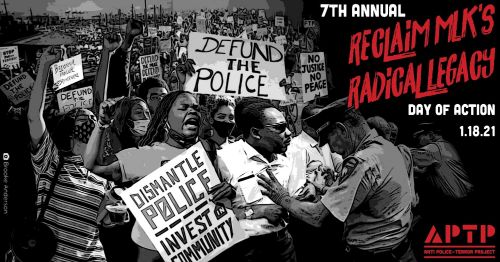 Gather your friends and family and join the Anti Police-Terror Project (APTP) for the 7th Annual March to Reclaim MLK’s Radical Legacy!  This year’s Reclaim “March” will be a car caravan that begins at the Port of Oakland, makes its way down International/E14, and ends at the Eastmont Mall in East Oakland with a short program.  The focus will be on defunding the police as together we reimagine public safety and address a decade of gentrification, displacement, and a worsening houselessness crisis.

For seven years running, the APTP Reclaim MLK event has been the only MLK March in the city of Oakland, bringing together thousands of people across race, class, and political ideology with a commitment to build a just and equitable city of which Dr. King would be proud.  For decades, MLK’s legacy has been whitewashed.  Often portrayed as a passive figure, in truth he was a radical leader demanding rational change: an end to capitalism, to war, to empire, to poverty, and to white supremacy.  Communities in Oakland and across the country take this opportunity every year to celebrate the true spirit of this revolutionary.

“The work to Refund. Restore. Reimagine our communities is a modern day reflection of King’s work, legacy and unfulfilled dream.  He said, “A nation that continues year after year to spend more money on military defense than programs of social uplift is approaching spiritual death.”  That’s Oakland’s budget every year.  As we reimagine what public safety means in Oakland — violence interruption, housing as a human right, living-wage jobs with dignity, good schools, clean streets and parks, mental health care and crisis support, and thriving communities — we are making King’s Dream a reality.”