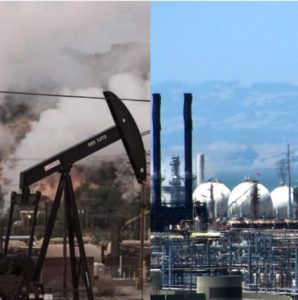 Tune into Webinar #2 in the Climate Safe California series, hosted by The Climate Center:

PHASING OUT FOSSIL FUELS: A JUST TRANSITION IN THE OIL & GAS DRILLING AND REFINING SECTORS

How do we transition away from fossil fuels while ensuring a just transition for workers and communities? Speakers will discuss the current impacts of fossil fuel production on frontline communities and what needs to be done to address them, a plan for decommissioning California refineries, and the possibility of enacting a fracking ban. What does the clean energy future look like? Register below.

Ingrid Brostrom, of theCenter on Race, Poverty & the Environment, has legal and policy expertise in environmental justice: toxics, climate justice, and land-use, with an emphasis on hazardous waste, oil and gas, and Just Transition.

Gustavo Aguirre Jr, a California native whose parents were farm workers and traveled from the coast to the desert following the seasonal crops, is a longtime social justice activist who has represented environmental justice communities on various state panels.

Greg Karras is an independent consultant with over 35 years of experience as a Senior Scientist for Communities for a Better Environment, author of the recent report, Decommissioning California Refineries: Climate and Health Paths in an Oil State.

Steve Garey is a retired refinery worker who has spent 25 years working for both Shell and Tesoro in their refineries in Washington State. He served as President of United Steelworkers Local 12-591 from 2010 until his retirement in 2015. Since then he has served on the executive committee of the Washington State Blue Green Alliance and on the steering committee of the Climate Alliance for Jobs and Clean Energy in Washington.

New Addition: Senator Scott Wiener, discussing SB 467, a bill to ban fracking, decrease the impact of fossil fuel production on adjacent communities, and foster a just transition for workers and communities that he just introduced with other lawmakers