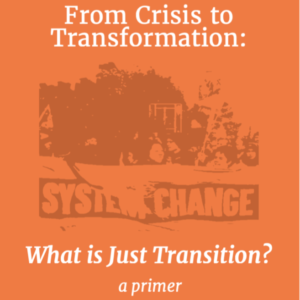 A new report from leaders of the global climate justice movement argues that “a broad vision of Just Transition with social justice at its core is critical, especially as fossil fuel companies and defenders of ‘business as usual’ are adopting the language of climate action and just transition to thwart real solutions.”

The report, From Crisis to Transformation: A Just Transition Primer, released by Grassroots Global Justice and the Transnational Institute, “explores the root causes of the climate crisis . . . and argues that we need transformative and anti-capitalist visions to bring us “from crisis to  transformation.” The report lays out the big picture of those causes, starting from colonialism, capitalism, and the industrial revolution, and traces the development of the current crisis. It outlines key elements of a true just transition:

Authors of the report include Jaron Brown of Grassroots Global Justice, Katie Sandwell and Lyda Fernanda Forero of the Transnational Institute, and Kali Akuno of Cooperation Jackson.

The report was released in Arabic, Spanish, and English, with plans to add translations in Bahasa, French, and Portuguese.

The Transnational Institute “is an international research and advocacy institute committed to building a just, democratic, and sustainable planet.”

They “offer this primer as a contribution to the broader ecosystem of Just Transition frameworks and articulations. In particular, we honor the work of the Just Transition Alliance, the Indigenous Environmental Network, the Climate Justice Alliance, Movement Generation, the Labor Network for Sustainability, and Trade Unions for Energy Democracy, among many others.”