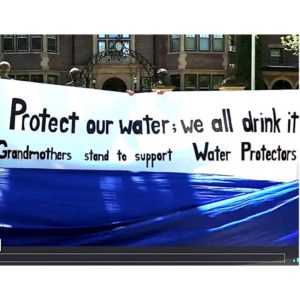 Watch this inspiring video of grandmothers from the Bay Area, the Lakota nation, and Minnesota, gathering at the residence of Minnesota Governor Tim Walz to tell him to #StopLine3. And pitch in to amplify this campaign, led by 1000 Grandmothers for Future Generations to support Indigenous water protectors fighting the Line 3 pipeline in Minnesota.

Sunflower Alliance was represented in a delegation of 31 grandmothers who recently traveled to Minnesota to support the resistance there: 26 members of 1000 Grandmothers, mostly from the Bay Area, joined by five Lakota grandmothers from South Dakota.

The grandmothers’ visit was part of the buildup for a massive Treaty People Gathering June 5 – 8, when people from all over the continent will travel to the pipeline site to “put our bodies on the line, to stop construction and tell the world that the days of tar sands pipelines are over.”  (See Join/Support the Uprising to Stop the Line 3Pipeline.)

Developer Enbridge is building Line 3 to bring oil from Canadian tar sands through Northern Minnesota to a refinery in Wisconsin, passing through land guaranteed to the Ojibwe people by several treaties, and its forests and sensitive waterways, including those growing the wild rice that is the staple of the traditional Ojibwe diet. The pipeline is also planned to go under the headwaters of the Mississippi River in at least ten places.  The pipeline is a human rights, environmental, and climate disaster.

While in Minnesota, the Bay Area and Lakota grandmothers met with Indigenous leaders battling the pipeline and held two actions to publicize the resistance.

HELP US CONTINUE THE CAMPAIGN

• Sign the grandmother-to-grandmother letter to Jill Biden.  (We define grandmothers as “elder women concerned about future generations,” whether or not you have biological grandchildren.)
• Email Minnesota Governor Tim Walz asking him to take action to stop the pipeline. Walz, a Democrat, talks about protecting the environment and indigenous rights and has done nothing to stop the pipeline.
• Support the campaign on social media.

Instructions and sample messages are here.