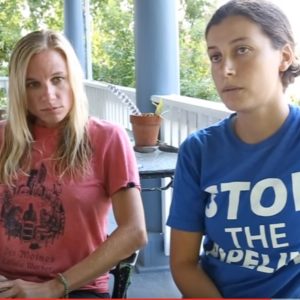 Jessica Reznicek, 35, and Ruby Montoya, 27, both of Des Moines, held a news conference Monday, Sept. 26, outside the Iowa Utilities Board’s offices, where they provided a detailed description of their deliberate efforts to stop the pipeline’s completion.

Both women are involved in Iowa’s Catholic Worker social justice movement and they described their pipeline sabotage as a “direct action” campaign that began on Election Day 2016.  They said their first incident of destruction involved burning at least five pieces of heavy equipment on the pipeline route in northwest Iowa’s Buena Vista County.

Jessica and Ruby need your support to spread the word!  They think they will likely be indicted soon and in jail awaiting trial.  If you are part of an organization, please consider emailing your list.  Please share on Facebook and Twitter.  Jessica and Ruby need all the support we can give.

More info:
In the fall of 2016, while the epic battle over Indigenous Rights and fossil fuel infrastructure was being waged in Standing Rock, ND against the Dakota Access Pipeline (DAPL), Catholic Workers Ruby Montoya and Jessica Reznicek sabotaged DAPL over and over during its construction near their home in Iowa, successfully delaying the destructive oil project for many weeks.

Recently, they revealed what they had done to the world, despite never being caught in the act.

How did this happen?

They taught themselves how to do sabotage. They had no special skills.

What does it prove?

*   For those who can, successful sabotage is doable and you don’t have to get caught.
*   The idea that the state and corporations are somehow “omniscient” and “undefeatable” is not true.

This changes the field for all environmentalists – and all people who work for change.