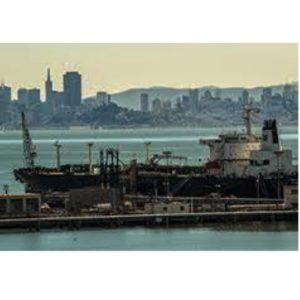 In a huge victory for the health of the Bay, our communities, and the climate, the US Army Corps of Engineers has dropped its plan to dig deeper shipping channels in the Carquinez Strait.  The plan was explicitly intended to make it cheaper to ship more oil to and from Bay Area refineries.

6,000 comments in opposition to the project were submitted to the Army Corps.

The plan to deepen the shipping channels, which had been in the works for decades, would have allowed large tankers to travel to and from refineries fully loaded.  Currently they must operate at less than full capacity.

According to Baykeeper, which announced the cancellation, “Deeper dredging could have contaminated the tap water flowing into hundreds of thousands of Bay-Delta homes and the irrigation water reaching the region’s crops with high levels of salt and possible pollutants — threatening both public health and agricultural productivity, as well as increasing the risk of disastrous oil spills.”  It would also have increased greenhouse gas emissions and the toxic burden on the Bay Area’s refinery corridor.

The project would also have been a gift of tax dollars — a nearly $15 million annual subsidy—at a time when we desperately need to stop burning fossil fuels.

The Sunflower Alliance, Stand.earth, Baykeeper, the Protect the Bay Coalition, Bay Area signatories on the Indigenous Women of the Americas Defending Mother Earth Treaty, Idle No More SF Bay, 1000 Grandmothers, and other community and environmental organizations mounted a forceful campaign against the project when the Army Corps of Engineers started moving more actively toward implementing the plan.

The official Army Corps of Engineers announcement, dated November 30, said the ACE dropped the project because no local partners would help pay for it:

“The Port of Stockton had been serving as the non-federal partner for the GRR/EIS; however on May 7, 2020, the Port Indicated that they would be unable to act as the cost-sharing sponsor for project design and implementation owing to the lack of nexus between Port facilities and the area of proposed channel improvements.  Contra Costa County also informed USACE that they were unable to act as a cost-sharing sponsor for project design and implementation.”

The original plan was to dredge deeper channels all the way to Stockton, but the most recent version proposed dredging only to Martinez.  That would have benefited all the oil refineries, but stopped short of the area where the dredging would have done the most dramatic environmental damage.  Critics suspected that the Army Corps proposed the shorter route to make it easier for the project to win approval.