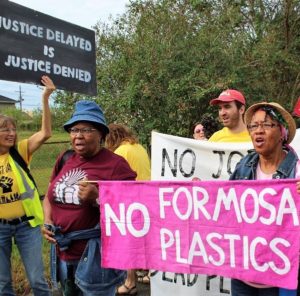 Join Extinction Rebellion SF in an action in solidarity with the majority-Black St. James Parish in Louisiana (aka Cancer Alley), where Formosa Plastics is trying to build a massive 14-facility petrochemicals complex  — which would double toxic emissions in the community.

Formosa’s plastics plant would produce the same air pollution as three new coal plants. To make matters even worse, Formosa is planning on building the site just one mile from an elementary school. The fact that the school is attended by mostly Black students is just one reason that the United Nations has denounced this as an environmentally racist project.

Bank of America is Formosa Plastics’ most important US bank. It has already helped the company sell $1 billion in bonds, and is the bank most likely to finance Formosa’s giant new petrochemical complex. What’s more, if Bank of America rules out funding this toxic project, other banks could follow.

The community has been fighting the project, led by the local organization RISE St. James. Join this event to deliver a petition to Bank of America executives to demand that Bank of America denounce environmental racism and not fund the Formosa Plastics Plant.