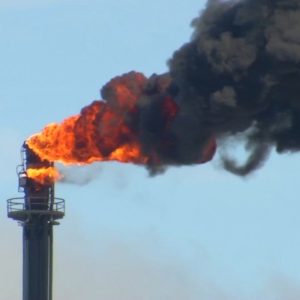 The Board of Directors of the Bay Area Air Quality Management District will be meeting on August 2nd, the first time since the state legislature passed California’s cap-and-trade program extension, AB 398.  Among that bill’s many other serious problems, it contains a little poison pill concocted by the oil industry to weaken the authority of local air districts.  AB 398 explicitly prevents statewide air districts from reducing carbon dioxide emissions from the large stationary source polluters covered by cap-and-trade.  From here on out, carbon dioxide reduction will be left exclusively to a market mechanism, ruling out direct regulation at the source.  The BAAQMD Board of Directors was preparing to vote in September to place a national precedent-setting cap on refinery greenhouse gas emissions, Rule 12-16.  This regulation, the culmination of four years of grassroots efforts, would have effectively prevented future emissions increases from Bay Area refineries.  Now the status of Rule 12-16 is once again unclear, thanks to the combined efforts of the Western States Petroleum Association and Governor Jerry Brown.

This legislative action and its potential effects on the Air District are on the August 2nd agenda (Item 17, under Presentations).  Air District legal and technical staff have concluded that “AB 398 preempts the Air District from regulating CO2 from sources under the Cap and Trade Program.  Consequently, Rule 12-16 is preempted.”   For climate justice activists, however, nothing has changed.  Please join us at this hearing to encourage the Board to urge staff to stay the course.  We note with interest—as did the state assembly legislative analyst— that AB 398 specifically preempts carbon dioxide reduction rules, but doesn’t specifically rule out the prevention of increases.  We remain fiercely determined to keep tar sands and other extra-polluting, heavier toxic crudes out of Bay Area refineries:  emissions caps are still the most effective means of doing that.

Now More Than Ever

Rule 12-16 is a necessary preventive measure.  Because greenhouse gases (GHGs) and criteria pollutants are co-emitted, a cap on GHGs would also effectively curtail increases of deadly particulate matter.  According to a study prepared by a panel of Bay Area public health experts, an unchecked transition to heavier oil feedstock will significantly increase mortality in the Bay Area, especially along the refinery corridor.  Rule 12-16 could cumulatively prevent some 800 to 3,000 deaths of Bay Area residents, given a refinery facility lifetime of 40 years following conversion to heavier crude.  The additional mortality burden for the Bay Area’s fenceline residents could be 8 – 12 times that of the Bay Area’s general population.  Refinery emissions caps would save lives—the lives of actual people we know and love.

We may have suffered a huge setback in Sacramento this month, but we are not giving up.  Join us in telling the Board that we must test the limits of the new state law and do absolutely everything within our power to protect the health of our most vulnerable communities.  The micro is also the macro:  by capping local refinery pollution we also mitigate the deadly planetary impacts of toxic carbon.  Now, more than ever, with carbon reduction quotas pushed well past the vanishing point, this is simply the right thing to do.

PLAN TO ARRIVE 20 MINS EARLY TO FILL OUT A SPEAKER’S CARD AND GET A SEAT IN THE HEARING ROOM.