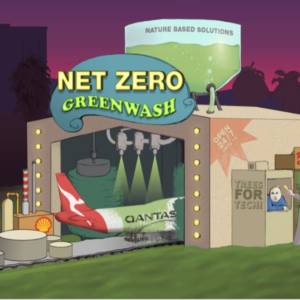 Companies and countries emitting greenhouse gases claim they are making up for that by buying “credits” from entities that are reducing greenhouse gas emissions. So they keep spewing out GHG—but the other side of the equation isn’t working.

At the recent COP 27, U.N. Secretary General António Guterres pointed to widespread “bogus net-zero pledges to cover up massive fossil fuel expansion.”  Net Zero commitments, he said, “have varying levels of rigor, and loopholes wide enough to drive a diesel truck through.  “We must have zero tolerance for net zero greenwashing.”

A report by a UN expert group on “net zero” commitments calls for major changes in the way carbon markets work.  COP 27 set up a body to come up with standards for carbon markets, but put off any specific standards for evaluating carbon credits until next year or the year after.

In this slide show from her recent talk at the Climate Social Science Network, Prof. McAfee takes us behind the scenes to show how the fraud, hype, and inherent problems of  current carbon market practices have:

* led to no significant climate mitigation,
* often resulted in violation of the rights of people in the global south as well as  destruction of natural ecosystems,
* provided cover for continued expansion of fossil fuels.