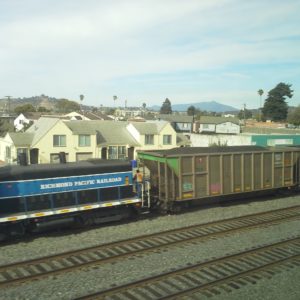 Knock on doors in Richmond to collect signatures to end coal shipments through the city—neighbors will thank you! Now is a critical time to build support for a local ordinance to phase out coal and petcoke shipments from the Levin-Richmond Terminal. It’s one of only three West Coast coal exporters and ships nearly a million metric tons of coal a year.

Six years ago the terminal dedicated its bulk operations to coal and petcoke. Since then their coal exports have increased an astonishing 435%. Each car in the mile-long unit trains that carry Utah coal through Richmond loses between 500 and 2,000 pounds of toxic coal dust. After it is unloaded at the terminal, coal sits in huge uncovered piles just blocks from homes, schools, and businesses. No Coal in Richmond has been working to end this ugly scenario.

Since late February, we’ve been door-knocking to spread awareness and collect signatures supporting the proposed land-use ordinance. Unlike other kinds of canvassing, environmental justice advocacy like ours gets a nearly unanimous thumbs-up in affected communities. We hope you will join us and help protect the health of our region and the planet!