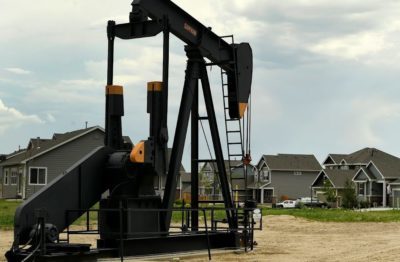 Environment justice advocates were overjoyed when Governor Newsom announced on October 21st that the state would move to block oil and gas drilling within about a half-mile of homes, hospitals and schools, a critical first step towards protecting communities from the hazards of fossil fuel extraction.  There are 32,400 wells within 3,200 feet of community sites that account for about a third of the state’s oil extraction.  The draft regulations developed by the California Department of Conservation’s Geologic Energy Management Division (CalGEM) would not ban wells already operating in that zone but would add new pollution controls.  Activists have fought long and hard for health and safety protections, but regulations have repeatedly failed in the face of industry and building trades opposition.

It should be pointed out that a very recently published study by Stanford researchers indicates negative health impacts from drilling within a 2.5 mile radius.  Note also that the rule does not cover permits to rework existing wells, nor does it prohibit slant drilling from outside the setback.

Now the public has a chance to weigh in on the proposed rulemaking  to protect communities and workers from these impacts.  Comments can be submitted through December 21st to calgemregulations@conservation.ca.gov.

Commenters are encouraged to identify concerns with the proposed language, provide information on potential economic impacts, and suggest alternatives to the proposed requirements.

Here are some sample talking points from Vision.

2)  DEMAND that the setback rule apply to existing wells, not just new wells:  NO REDRILLING of existing wells within the 3,200 ft setback distance.

3)  EMERGENCY RESPONSE  to ban all new permits within the setback until the final rule is in effect.