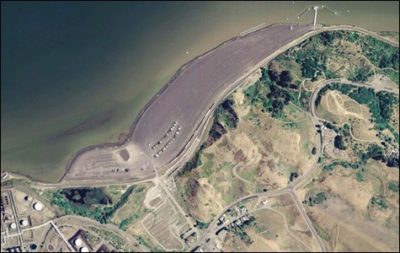 In response to public pressure, the Department of Toxic Substances Control has called a public meeting in Vallejo for April 3rd on the Selby Slag Remediation.  And the comment period has been extended to Thursday, April 12th.

The 66-acre Selby Slag, a 2.5 million ton slag pile loaded with toxic heavy metals, is a State Superfund site—a highly contaminated stretch of  San Francisco Bay waterfront land lying at the terminus of ‘A’ Street in Crockett.  From 1872-1971 it was a site of metal smelting (for copper, gold, silver and lead) and sulfuric acid production.  The remaining covered-up sulfuric acid pits are on a 200-foot shelf of land that intrudes directly into the Bay.  These pits are constantly liberating toxic heavy metal “leachate” from the slag into unprotected bay waters.  The Phillips 66 refinery just happens to own this portion of the site.

Previous remediation has already been performed, including dredging some contaminated slag and capping the site with asphalt.  But there’s still more to be done to protect the bay’s various communities, human and aquatic.  Neighboring residents are concerned that the proposed cleanup would further contaminate bay waters and bring even more toxic exposure their way.

A bayside wall has been proposed to stop the steady flow of contamination.  Sounds great, except that it would be made from interlocking sheet metal posts and embedded into old bay mud, instead of the underlying bedrock.  The metal wall would be exposed to strong acid, and would have only a short designated 25-year lifespan (when finished in 2023).  It certainly would not protect the acidified slag from sea-level rise past 2050.

The Selby Slag Site is laced with huge amounts of health-damaging  lead, zinc, copper, arsenic, antimony, cadmium, and nickel.   It needs to be cleaned up for real and not receive a short-term 25-year bandaid, a leaky wall with a limited life span.  Instead of proposing to remove the whole slag pile, State planners and Phillips 66 are offering a partial solution.  They have even excluded an  effective alternative—removing a much smaller portion of the slag that contains the most toxic and acidic material.

The land is currently owned by C.S. Land, Inc. (CSLI, a subsidiary of Phillips 66), and the California State Lands Commission (CSLC), co-owned by agreement.  The prior owner “Selby Smelting Co.” (ASARCO) and the current owners are responsible for cleanup.  Let’s make sure that cleanup is thorough.

The California Department of Toxic Substances Control (DTSC) freely acknowledges that groundwater moves through the capped slag, picks up metals and discharges them into the bay; metals leach to the bay as tides move in and out of the capped site, and exposed shoreline slag erodes into the bay due to waves.   Read their full Draft Environmental Impact Report.  Their current plan is to:

• Remove the cap along the waterfront,
• remove the contaminated submerged bay-side slag and store on-site,
• drill several drainage wells in the acidified portion and filter the toxic metals within the drainage in a dedicated, special facility separate from the perimeter drainage, and
• install a sea wall.

The Draft Environmental Impact Report (DEIR) on Selby Slag cleanup is currently up for public review.  You can submit comments to the Department of Toxic Substances Control through April 12, 2018.

Demand that a 100 year-worthy sea wall be embedded into underlying bedrock and safe from sea level rise, and that the acidified, most toxic portion of the slag and the remnant sulfuric acid be removed entirely and safely from the Rodeo site.  And here are some urgent questions you can raise:

• What measures are taken to protect the people living in Rodeo and Crockett from a release of these heavy metals while dredging the site?
• How much pollution is currently happening at the coast where the slag lies?
• Wouldn’t the dredging stir up the contaminated slag in the Bay waters?  Could this cause a toxic plume into the Bay and further contaminate bay waters?