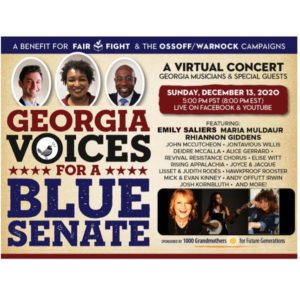 As you know, Democrats Warnock and Ossoff are facing Republican opponents Kelly Loeffler and David Perdue in a runoff election for Georgia’s two Senate seats January 5. If they win, the US Senate will be divided 50-50 between Democrats and Republicans, ending Mitch McConnell’s ability to block anything good from happening.

Georgia Voices for a Blue Senate will bring together Georgia musicians with a range of acoustic styles, as well as a few non-Georgia stars.

100% of the proceeds will be split evenly between Fair Fight and the two Senate campaigns.

A strong showing of early donations will encourage people to donate more during the concert. So help prime the pump by donating here

The stakes couldn’t be higher!