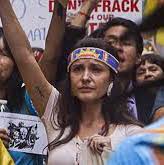 Join four Indigenous environmental leaders on an extraordinary trans-continental adventure through North and South America  — and support their work for climate justice.

In the award-winning documentary, The Condor and the Eagle, Casey Camp-Horinek, Yudith Nieto, Melina Laboucan-Massimo, and Bryan Parras travel from the Canadian plains to deep into the heart of the Amazonian jungle to unite the peoples of North and South America.

Melina Laboucan-Massimo, and Bryan Parras live in the two energy capitals of North America: the tar sands in Canada and Houston in the US.  Casey Camp-Horinek, Yudith Nieto live in Houston and Oklahoma alongside oil pipeline routes.

In The Condor & The Eagle, we follow these four leaders as they develop a resistance strategy that matches the level of their opponents – taking their effort to South America, Europe and beyond. Their task is to make local battles an international concern and finally expose criminal corporations responsible for serious crimes. Our protagonists participate in the creation of alliances with communities in Latin America – the Global Alliance For The Rights Of Nature – the Indigenous Women Treaty and a renewable energy network bringing solar power to Indigenous communities.

Come together viritually to watch The Condor and the Eagle, then stay for a panel discussion that includes activists from Black, Brown and Indigenous communities.

Ancient native prophecies say: “When the Eagle of the North and the Condor of the South fly together, Indigenous peoples will unite the human family.”