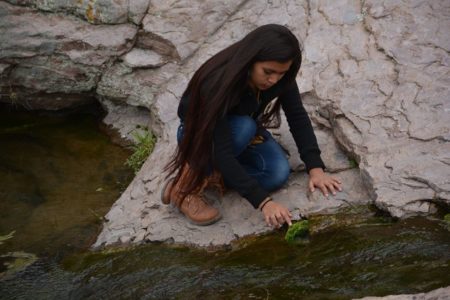 For several years now, an Apache sacred site in Arizona called Chi’ chil Bildagoteel, otherwise known as Oak Flat, has been in the sites of a multinational mining corporation, Rio Tinto.   A federal decision was supposed to have dropped in December 2021, but now in the waning days of the Trump administration, it is suddenly being fastracked.

Apache-Stronghold leader Wendsler Nosie Sr. says, “We were in the fourth quarter with two minutes left in the game. And then Trump cheated so now we only have one minute left.  Everybody has to fight this.”

You can see a replay here of the powerful webinar for the December 21st Day of Prayer and Action for Oak Flat to learn how to help protect this sacred site for those not yet born.  Speakers from the Poor Peoples Campaign are joined by impassioned youth from the San Carlos Apache commmunity, as well as Indigenous activists from Mongolia who are also fighting Rio Tinto.  This company is responsible for the destruction of a 46,000-year-old Aboriginal site in Australia, and it should not be allowed anywhere near Oak Flat and adjacent Apache Leap—the Apache Nation’s Masada, where 75 Apaches defenders rode their horses off the mountain, rather than be captured by the U.S. cavalry.

The Apache have held religious and cultural ceremonies on Oak Flat for centuries and right up through the present.  This is where medicinal plants and traditional foods are regularly gathered, a place of community gathering and cultural preservation.  There are burial grounds here and petroglyphs.  But six years ago, Senators John McCain and Jeff Flake added a rider to the National Defense Authorization Act enabling the give-away of this formerly protected Apache land to a foreign mining company.

According to the Forest Service’s own environmental impact report, the proposed mine has a “high potential . . . to directly, adversely, and permanently affect . . . places and experiences of high spiritual and other value to tribal members.”  But Rio Tinto is bent on extracting its treasure of subterranean copper at whatever cost to the Apache.  The mine will replace Chi’ chil Bildagoteel with a crater two miles wide and 1,000 feet deep.  Says Michael Brune, Executive Director of the Sierra Club, this will create a sacrifice zone in place of a sacred site, eliminating “the habitat of species that call Oak Flat home, and likely contaminating precious water supplies in drought-prone Arizona.  Then there’s the issue of the toxic waste the mine would generate—all 1.4 billion tons of it.”

Watch the Facebook livestream replay of December 21st Day of Prayer and Action for Oak Flat.

For those who want to Tweet at their congress reps, here are some samples:
Co-sponsor the Save Oak Flat Act 2021.
@SenMarkKelly It’s time to protect sacred land!
#protectoakflat #PoorPeoplesCampaign
Live tweet quotes that inspire you from the speakers today
#protectoakflat #PoorPeoplesCampaign
Retweet other tweets to people’s senators and add own message
https://twitter.com/carolarose77/status/1341082115996184576
Senator ___(@and their twitter)__ , please sign on as co-sponsor of the Save Oak Flat Act 2021. Protect sacred land!  (Add your heartfelt message about why.)
I want my Senator to lead for the earth and for freedom of religion.  Co-sponsor Save Oak Flat Act 2021!
Translate page