We are happy to announce the long-awaited release of  “Decommissioning California Refineries: Climate and Health Paths in an Oil State.” A virtual press conference was held the morning of July 6th to announce its publication.

As this report was being prepared, no one could have predicted the context in which it made its appearance.  California is the center of oil refining in the western U.S., with nearly 50% of its refining capacity in the five closely spaced oil refineries of Contra Costa and Solano counties.  As the U.S. attempts, under failed federal leadership, to contend with the COVID-19 crises, the International Energy Agency reports that any economic recovery that fails to step up to the urgency of addressing climate change will make it impossible to prevent climate catastrophe. 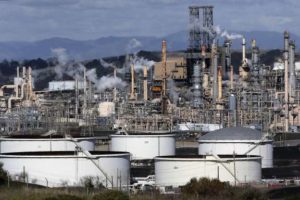 “Starting [a phase-down] sooner allows state climate targets to be met by cutting oil use more gradually, which makes transitions that protect workers and communities possible and climate goals feasible,” said Greg Karras, who authored the report for CBE.  These words could not be more relevant given the July 31st announcement by the Marathon refinery in Martinez that it is laying off 700 workers starting in October, and that it anticipates a pivot towards biofuels (fats and oils) and away from petroleum.

Facilities such as refineries are major local emission centers for toxic co-pollutants alongside greenhouse gases, especially fine-sized particulate matter or soot (PM2.5).   “From Richmond to Wilmington black and brown communities are on the frontlines of a toxic relationship with oil.  This is a blueprint for organizing just transitions out of it,” says Andrés Soto, Richmond Organizer at CBE.

A path of gradual reductions, approximately 4-7% of refining capacity per year, will not even immediately affect California oil consumption.  Californians already use significantly less refined fuel than produced by the refineries; refinery exports have grown to nearly a third of capacity.  “Refineries around here pollute our communities even more by refining more oil to sell even more of their polluting fuels somewhere else, like black lives are invisible” says LaDonna Williams, a community leader who lives in South Vallejo.

A. critical component of the report is addressing the challenges of transitioning workers and communities that are financially dependent upon the fossil fuel industry.  Steve Garey, a retired oil refinery worker, former United Steel Workers union official and leader in the Blue-Green Alliance,  spoke passionately at the report’s press release about bringing workers and communities together to build a new economy.