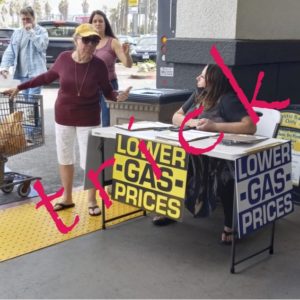 After a massive statewide struggle led by people in the most impacted frontline communities, California finally passed a law banning new permits for oil and gas drilling within 3.200 ft. of neighborhoods, schools, clinics, and other “sensitive areas.”

So of course Big Oil is fighting back. They are spending some of their millions on circulating a petition to put a measure on the ballot that would repeal this new law. If they succeed in getting enough signatures to put the measure on the ballot, enforcement of the new law will stop until the November 2024 election.

Big Oil is paying signature-gatherers to tell people that the new law will raise gas prices. But we know the oil industry is raising the price of gas, not because of a shortage but because the crisis in Ukraine allows them to pretend there’s a shortage. In fact, they are holding reserves back to create an artificial shortage, and oil industry profits are rising.

“It’s Big Business and their millions of dollars vs. public health. It’s really that simple, but we’re not going back. We’re ready to defend every Californian’s right to a livable future where some company can’t just set up shop and pollute your family right in your own backyard,” says Kobi Naseck, Coalition Coordinator, VISION (Voices in Solidarity Against Oil in Neighborhoods), which has been leading the fight to ban neighborhood drilling.

Many people gathering signatures are not aware that this measure would take away protection against neighborhood drilling. In one recent conversation, the signature-gatherer stopped promoting that petition when they found out.

So, when you see someone gathering signatures to repeal SB 1137, the ban on neighborhood oil and gas drilling:
1. Don’t sign
2. Tell family and friends not to sign
3. Let the signature-gatherer know about this oil industry trick and encourage them to drop this petition.