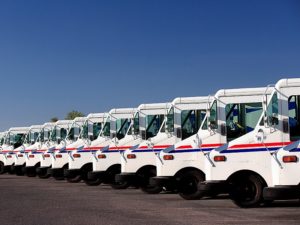 The US Postal Service is rethinking the appalling decision, by the appalling, Trump-appointed Louis DeJoy, to replace its fleet with 90% polluting trucks.  After a storm of protest that many of us participated in, the USPS announced its intent to conduct a Supplemental Environmental Impact Statement (SEIS).

So will DeJoy listen? Probably not. But as Earthjustice writes: “it’s critical we show that we’re still enraged on this issue, so the next generation of postal service leadership doesn’t hesitate to do what’s right.”

The purchase of a fleet of new trucks will determine USPS pollution for the life of those trucks — decades. Earthjustice writes that this purchase of new trucks “is a once-in-a-generation opportunity to electrify our postal fleet.”

Earthjustice and its partners are already suing the USPS over DeJoy’s decision, but they say continuing public pressure is important.

Fill out a public comment demanding the new fleet of trucks be 100% electric here.