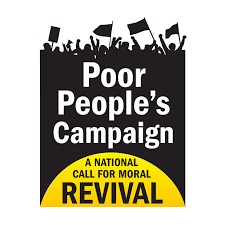 Join the largest digital and social media gathering of poor and low-wealth people, moral and religious leaders, advocates, and people of conscience in this nation’s history. A global pandemic is exposing even more the already existing crisis of systemic racism, poverty, ecological devastation, the war economy and militarism, and the distorted moral narrative of religious nationalism. On June 20, the 140 million poor and low-wealth people across this nation will be heard!

The Poor People’s Campaign is organizing this important digital event. They write:

Get connected to your state’s coordinating committee.

The Poor People’s Campaign: A National Call for Moral Revival is made up of people of all backgrounds, we are Black, Brown, White, Native, and Asian; we are old and young; we are Christian, Sikh, Jewish, Buddhist, Hindu, Muslim; we are people of faith and not of faith; we are people of all sexual orientations and gender identities; we are led by poor people and we are a cross-class movement; we are people of all abilities; and we live across this nation, from Alabama to Alaska, from Maine to California to Mississippi.