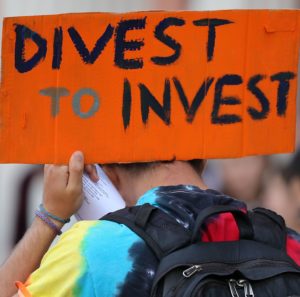 Join the Youth Climate Finance Movement and a global coalition of organizations to hear about a historic slate of new groundbreaking divest/invest commitments and a new report on the state of the divest/invest movement, including an update of assets under management committed to divestment.

The movement to divest pension funds, universities and colleges, faith organizations and foundations from fossil fuels, and invest in climate solutions, has reached new heights.

Invest/Divest 2021: A Decade of Progress Toward a Just Climate Future will include high-profile speakers who will unveil a suite of new announcements. Movement leaders working on divest/invest and climate finance will issue calls for enhanced investments in just climate solutions and further action to shift money away from coal, oil and gas.