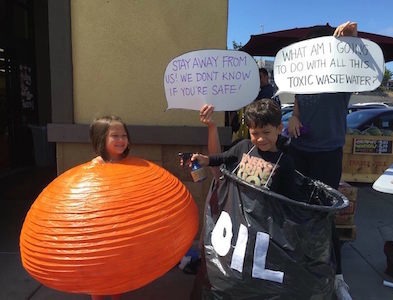 Who says oil and water don’t mix?  Now that the oil industry is selling its wastewater to irrigate drought-stricken California farms, another law of nature is being violated by the petroleros.  Our fruits and vegetables—some of them labeled organic—are being produced with oil wastewater.  Join us as we carpool to Sacramento to tell Governor Brown to stop this oily mess.

According to a recent article in Mother Jones, Chevron and other oil companies provided half the water that went to 45,000 acres of farmland in Kern County in 2014, up from about 35 percent before the start of the drought in 2011.  Last year the state’s largest oil company, California Resources Corp., announced plans to quadruple the amount of wastewater it sells to farmers.

No comprehensive independent testing has been conducted to ensure that our crops—and the farmworkers who work with them—are protected from the hundreds of chemicals used in oil operations.  Some of these industrial chemicals have been clearly shown to be carcinogenic and toxic.  We’re tired of being lab rats in an oil and gas experiment, so we’re calling on Governor Brown and the State Water Board to stop this practice immediately.