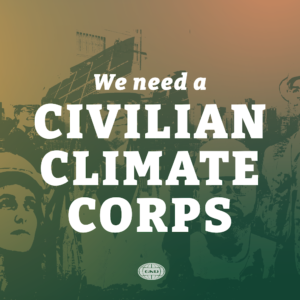 Join the Sunrise Movement and Extinction Rebellion to put the heat on Sen. Feinstein for her inaction on the climate crisis and tell her to support the creation of a Civilian Climate Corps.

This proposal, modeled on the New Deal Civilian Conservation Corps, was developed by the Sunrise Movement. It was included in Biden’s executive orders on climate, but with no funding, and was among the measures stripped out of Biden’s American Jobs Plan in an effort to get Republicans to sign on.

Many Congressional Democrats say they will include climate and other measures that were stripped out of the bill in a separate budget bill — but everything is still in play in Congress. So this is the time for pressure from constituents.

Californians will come together to rally outside Feinsten’s offices at three different locations. Can you join the rally in downtown San Francisco to demand a bold and equity-based Civilian Climate Corps?

Organizers from Extinction Rebellion SF Bay are collaborating with Sunrise to help fill roles for the action. If you’d like to get involved with planning or support in any way, please email our Direct Action working group: dawg@xrsfbay.org.