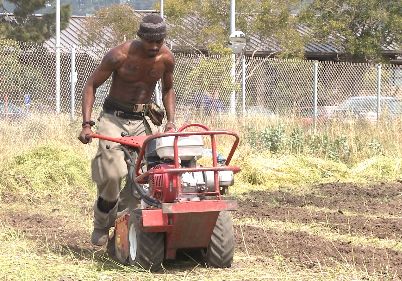 KQED viewers should be able to pick up KRCB and KPJK with no difficulty.  You can also stream KRCB on its website if you are viewing in its demographic area.

Occupy the Farm follows a community’s struggle to preserve public land for urban farming.  The Gill Family transferred their farm to UC Berkeley in 1929, believing that it would always remain a farm.  But by the 21st century only a fraction of it remained open growing fields.  The film captures an intense conflict over the fate of the last remaining 20 acres of farmable land in the urban East Bay, when community members employed an ingenious and audacious strategy to confront a powerful institution that had ignored them.

When the 200 community members marched to the gates of this farm, they did not carry signs protesting the University of California’s plans to turn this research farm into a shopping mall.  Instead, they carried tents, tools and 15,000 seedlings.  They cut the padlocks off the gate, marched onto the land and planted two acres of crops.  What happened next changed the destiny of the land and presented a hopeful new strategy for activists.  From preparing the soil, to police raids, from lawsuits to overflowing harvests, Occupy the Farm reveals a resourceful community facing off against a powerful institution to provide access to healthy food and protection for public lands.

Following the film, a roundtable discussion will update the work on the farm during the pandemic, discuss new threats to this contested land, and reflect on what the pandemic, and climate change mean for the future of urban agriculture.  Participants include: Effie Rawlings, UC Gill Tract Community Farm member, and OCCUPY THE FARM organizer; Ashoka Finley, an OCCUPY THE FARM organizer and urban farmer who works in technology, and is now part of a start up in San Francisco; Will Smith, of Black Earth Farmers, who took the responsibility to manage farming operations just prior to Covid-19, and throughout the pandemic led farming, and food distribution for the Gill Tract; Charisma Acey, Associate Professor of City and Regional Planning in the College of Environmental Design, and Faculty Director of the Berkeley Food Institute, who looks at the potential for urban farming amid increased pressures on the available land; and Todd Darling, the film’s director/producer. 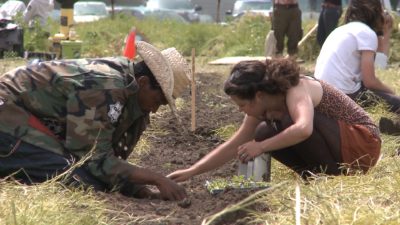 The occupation transformed from an occupation to an actual farm.  Organizers who had once been arrested for trespassing now have keys to the front gate.  Slightly more than one acre of land at the Gill Tract became the UC Gill Tract Community Farm.  Volunteers from the community work alongside researchers from UC College of Natural Resources, and have created a research farm that operates a weekly farm stand, distributes food to East Bay organizations, and studies how best to create resilient, urban agriculture.

During the pandemic, the need for resilient, urban farming became painfully obvious.  Tens of thousands of families in the Bay Area became food insecure.  Food banks were stretched to their limit as a result of Covid-19.  This one-acre farm was able to supply food to 70 East Bay families a week, at no charge, even with delays and the complications of developing COVID 19 protocols.  With the arrival of Spring, the farm is now busy planting crops, preparing for a productive 2021. Revolving crews of volunteers arrive to work the farm and are led by Farm Educators.

Now, however, the Gill Tract land faces a new dilemma.  UC Berkeley says they need housing for an expanded student population.  Land that currently contains the farm’s barns and offices, and that once housed numerous greenhouses, has been targeted by the University for a large, six or seven story dormitory.  Intended for graduate students, the dormitory would be built by a Texas company, American Campus Communities, which specializes in “the privatization process.”  The company would build the dorm on the Gill Tract and then own and operate it.  This new dormitory will shrink the growing lands as the existing facilities would have to be moved onto the remaining fields.  According to preliminary plans, the dormitory will provide no classrooms or space for the farm, nor offer any educational linkage to this farm.  Additionally, the University’s ten-year commitment to operate the UC Gill Tract Community Farm will soon expire.  According to UC Capital Strategies, the UC Regents still have to approve the plans and the contract with American Campus Communities.  The test of whether these public resources are for research for the public good, or will be “privatized,” is once again on the table.