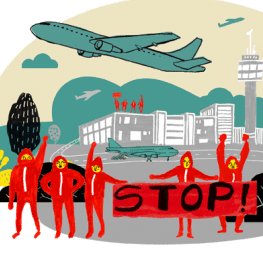 Sunflower Alliance and 350 Contra Costa together will host a discussion of the controversy over the proposed expansion of Oakland Airport.  The Port of Oakland, which owns the airport, wants to add three new terminals — 17 gates.  The Stop OAK Airport Expansion Coalition (40 community, environmental, and labor organizations) opposes the project because more flights mean more noise, pollution, and traffic congestion for the airport’s neighbors, many low-income and people of color.

More flights would mean more hazardous materials and fossil fuels coming to and stored at the airport.

And air travel is a huge contributor to the climate crisis.  The coalition reports that aviation is  “the most climate-harming mode of transport due to high altitude effects.  The total climate impact of flight is on average 3 times the effect of the emitted CO2 alone.”

This issue is also related to current controversies over plans by the Phillips 66 and Marathon refineries to convert to producing biofuel.  Both the oil industry and the airline industry promote the Big Lie that biofuel can make air travel “green,” to enable them to continue pollution and climate destruction.

Join us to learn about Bay Area airline and airport emissions, the Oakland Airport expansion plan, and the fight to stop it.

Dan Rutherford, shipping and aviation director at the International Council on Clean Transportation.

Casey Coward, of the SEIU United Service Workers West, speaking about the campaign  that brings together union and climate activists to resist the LAX Airport Expansion.