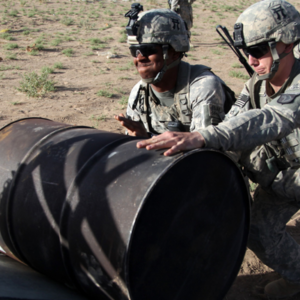 Join the Green Sofa Cinema Series for a Zoom chat with Andrea Marr, a retired military officer and award-winning climate activist. Before the event, settle into a comfy sofa and watch The Burden from writer/director Roger Sorkin.
The Burden has been called “the most effective communications tool ever made for shifting the debate on clean energy as one of urgent national security.” The film underscores the US military dependence on oil. Our military is the largest global institutional producer of greenhouse gas emissions. For every $1 the price of a barrel of oil goes up, it costs the military $130 million. The Department of Defense consumes 50% of the US discretionary budget.

Writer/director Roger Sorkin has served as a communications advisor to the NATO Energy Security Centre of Excellence. His films have been screened at the White House, the Pentagon, the US War College, NATO Headquarters in Belgium, and are in the Annapolis Naval Academy curriculum.

Speaker Andrea Marr is Costa Mesa Mayor Pro-tem, a retired military officer, and a recipient of the White House Champion of Change Award for her work in energy as a veteran.

She has a degree in aerospace engineering, graduated from the US Naval Academy, led a division of 20 nuclear machinist mates on the USS Nimitz aircraft carrier, and completed two tours in the Gulf. As a retired military officer, she has been working in energy efficiency and renewable energy. She is a frequent guest speaker on climate and energy for several organizations, including Operation Free, a nationwide coalition of veterans and national security experts who advocate for securing America with clean energy.

What can the average citizen do to influence military priorities and spending on fossil fuels? Congresswoman Barbara Lee (Chair of the House Subcommittee on State and Foreign Operations) introduced H.R. 767 last November which, if made into law, will require the Department of Defense to do a GHG inventory and commit to lowering emissions from its more than 450 US military bases by increasing energy efficiency and relying more on renewable energy. Sen. Elizabeth Warren (on the Senate Armed Services Committee) called on the DoD to have its current budget reflect the urgency of the climate crisis. We can urge our members of Congress and US Senators to support H.R. 767, and ask friends and family in other states to do the same. Tell them about the film, too.